The NSW Doctors Orchestra’s Instrumental Scholarship is a major highlight of the Sydney Eisteddfod program. It attracts the finest talent from Australia, and since beginning in 2006, just under 350 aspiring instrumentalists have performed on its stages. Investing in the arts is always worthwhile, and over the past eight years, this scholarship has contributed some $75,000 to the cultural capital of the nation by making it possible for eight outstanding young musicians to study abroad.

Earlier winners are now pursuing musical careers, while all the more recent ones are doing brilliantly in their studies. In 2010, flautist Rosie Gallagher won the scholarship on the eve of her departure for the Juilliard School in New York. The 2011 winner violinist Emily Sun is now engrossed in her studies at the Royal College of Music in London.  Brilliant classical guitarist Andrey Lebedev, who won in 2012, is another thankful recipient, while the 2013 winner, violinist Anna Da Silva Chen, is now preparing to follow her dream in the United States.  All winners enthusiastically acknowledge the value of this scholarship.

These success stories all stem from the fortuitous partnership Sydney Eisteddfod formed through NSW Doctors Orchestra’s founder and Manager Dr Cathy Fraser in 2009.

Magdalenna captivated the audience at the Final on Friday 16 August at Sydney Conservatorium of Music with her performance of Debussy's Premiere Rhapsody, accompanied by Paul Cheung, and Widmann's Fantasie for Clarinet Solo. Magdalenna earned herself the winning title, a $6,000 scholarship and $2,000 cash prize, sponsored by the NSW Doctors Orchestra - Musicus Medicus.

Magdalenna plans to move to London in a few weeks time to begin a Master of Performance at the Royal College of Music with hopes to further develop her already impressive skillset and reach a new level of performance capability.

The Second Scholarship was awarded to saxophonist Justinn Lu. He received a $2,500 scholarship and $500 cash, sponsored by The Brian Shearman Memorial Trust Fund, established by his Family & Friends.

Open to ambitious musicians between 16 and 25 years of age, the evening saw a range of instrumentalists take to the stage and prove the future of Australian music is in good hands. 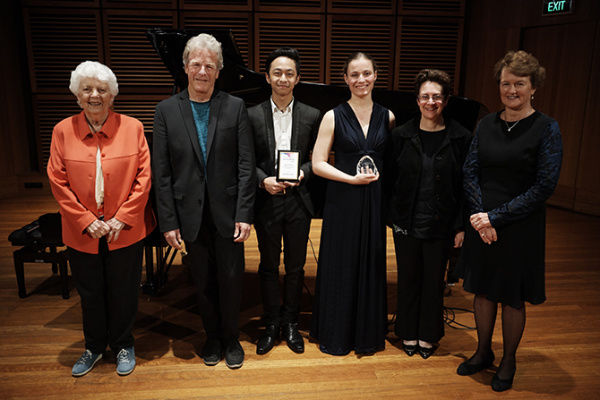 After captivating audience members at the Final on 10thAugust with his rendition of Agrestide, Op. 44 by Eugene Bozza, Rondo in D Major KV Anh. 184 by Mozart and Nura for Flute and Piano, 3rdmovement: Earth Dance by Ross Edwards, Brian Kim claimed the winning title and a generous prize of $8,000, sponsored by the NSW Doctors Orchestra - Musicus Medicus.

Over the years Brian has competed in various Sydney Eisteddfod events for the flute, notably winning The Sydney Eisteddfod Alf & Pearl Pollard Memorial Awards for Performance Excellence (12-16 years). Brian passed both his AMusA and LMusA flute exams with distinction in 2013. Now, having just turned 19, Brian will soon be travelling to Paris to study at the Conservatoire National Superieur de Musique.

The second scholarship was awarded to violinist, Mitzi Gardner, who will receive $3,000, sponsored by The Brian Shearman Memorial Trust Fund, established by his Family & Friends.

The other finalists included a range of instrumentalists: Magdalena  Krstevska (Clarinet), Jessica Scott (Flute), Dennis Van Rooyen (Classical Guitar) and Jeffrey Cheah (Classical Guitar) all performed exceptionally well and adjudicators Andrew Del Riccio, Dr Joanna Drimatis and Prof Michael Field AM, MD were very impressed with the high level of performances presented by all the finalists. Each finalist without a place received $500 each. They are all invited to compete in the 2018 Young Virtuoso State Award Final run by Fine Music 102.5FM.

We join Sydney Eisteddfod in congratulating Brian Kim and all the finalists on their hard work and dedication, and we wish them every success and fulfilment in their music careers, both locally and internationally.

Audience members were captivated on Friday 11 August as Rachel Thompson claimed the winning title in the 2017 NSW Drs Orchestra Sydney Eisteddfod Instrumental Scholarship. Open to ambitious musicians between 16 and 25 years of age, the evening saw a range of violinists, trombonists and clarinetists take to the stage and demonstrate just how skillful the next generation of Australian artists are.

Rachel performed Igor Stravinsky's Three Pieces for Clarinet Solo and Peregi Verbunk, op. 40 by Leo Weiner and received a $6,000 Scholarship and $2,000 cash to assist in furthering her career.

A second prize consisting of a $3,000 Scholarship sponsored by The Brian Sherman Memorial Trust Fund was awarded to Jamie McCarthy.

Despite there being only one winner, all finalists performed to an incredibly high standard. Finalists Claudia Jelic, Mitzi Gardner, Aimee Vozzo and Jeffrey Cheah received $500 for participating in the event and both judges believe that all entrants have promising futures in music.

Cellist Vincent Lo emerged victorious on Friday 19 August, winning the 2016 NSW Drs Orchestra Sydney Eisteddfod Instrumental Scholarship. The event open to musicians between 16 and 25 years of age,  also showcased a range of talented violinists, harpists and classical guitarists, however judges Maestro Steven Hillinger and Marjorie Maydwell explained that Vincent's attention to detail and well-ranged repertoire gave him the competitive edge over the other finalists.

Over the years Vincent has competed in various Sydney Eisteddfod events for Cello, notably winning the Instrumental Duo (Any Age) event consecutively in 2014 and 2015. This was his second time competing in the NSW Drs Orchestra Sydney Eisteddfod Instrumental Scholarship Final, having made it through in 2015 as well.

The judges decision was unanimous she explained, "it was not only his prowess as a musician but his interpretation of the pieces he performed, he is definitely ready for the next step".

Although there could only be one winner, finalists Mitzi Gardner (Violin), Andrew Blanch (Classical Guitar), Amy Huang (Violin) , Julie Kim (Harp) and Jeffrey Cheah (Classical Guitar), each received $400 for participating in the event and equally impressed the judges with the high standard they presented.

The standard of playing in the final of the 2015 Sydney Eisteddfod NSW Drs Orchestra Scholarship at the Sydney Conservatorium on August 21 strongly suggested the future of classical music in Australia is in good hands. Open to instrumentalists in the 16-to-25 age group, this $8,000 scholarship is now in its 10th year. Originally offered under the Nelson Meers Foundation banner, it has been generously sponsored by the NSW Drs Orchestra since 2010 and previous winners are either already making careers in music or excelling in studies abroad.

The six finalists all performed superbly, and although three cellists featured in the final, Johanna Blake, Vincent Lo and Francis Yoon, all performed works by different composers. There were no repeats, flautist Chloe Chung, violinist Lily Higson-Spence and classical guitarist Ciaran Edwards-McKeown who completed the final line-up provided contrast in a program the audience thoroughly enjoyed.

The six finalists all performed superbly, and genuinely impressed by their performance, adjudicators Christina Leonard and Dr Andrew Kennedy were  adamant all were worthy of the prize.  They regretted there could be only one winner, but at the end of the night, it was the youngest finalist Lily Higson-Spence who went home with scholarship.

Accompanied by her mother Lana Higson, who won the City of Sydney Eisteddfod Piano Scholarship in 1992, Lily scored her victory playing Debussy’s Sonata for Violin & Piano i. Allegro vivo, Nocturne by Australian composer Margaret Sutherland and Ravel’s evocative Tzigane. Lily, who studies with Robin Wilson, is now preparing to compete in the 2015 final of the ABC Symphony Australia Young Performer of the Year Awards.

A dream came true for 18-year-old violinist Wendy Kong when she was named winner of the prestigious Sydney Eisteddfod NSW Drs Orchestra Instrumental Scholarship for 2014 on August 17.

Wendy, who began playing the violin at the age of six, is no stranger to the Sydney Eisteddfod platform. She bowed into the competition in 2007 and immediately established herself as a rising talent by winning the Violin Solo (12/u). The following year, she confirmed her promise by finishing third in the Violin Solo (25/u), and since then she has won numerous awards, not only at Sydney Eisteddfod, but also in other competitions.

Wendy now has her heart set on furthering her studies in the United States, and applauding her recent victory, Sydney Eisteddfod wishes her every success as she continues her journey in the world of music.